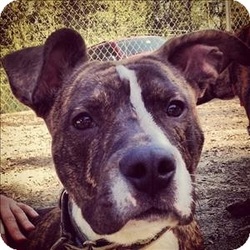 KHS Volunteer page
RE:  Loco April 29 2014
Steph Martin and the rest of the Vet Services staff would like to thank Terry Shuck from Thunder Paws Animal Massage & Underwater Treadmill and Joyce Dickinson for their help with Loco's rehabilitation! Thank you to Terry for providing water therapy for Loco, and thank you to Joyce for transporting him to and from his appointments!
-Sarah Moody
-Volunteer Coordinator at Kitsap Humane Society

TRINITY
3/30/14
Dear Terry,
We are incredibly grateful for your competence and expertise during Trinity's post-surgical recuperation. Our twice weekly treadmill sessions with you resulted in Trinity's rapid recovery from spinal surgery. Your weekly reports and videos were received with great acclaim by her vet and her surgeon. Through these detailed reports & videos, we were able to track improvement of her coordination, balance and muscle development as she learned to walk again (pain free).  Due to your competence and dedication, Trinity is now a very happy, playful 10 year old Leonberger.
Thanks always,
Polly and Edwin Sarsfield
Sequim, WA 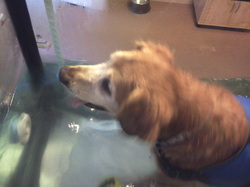 Hello All Doggie Moms and Dads!
My name is Puckett Bainbridge and my Mom’s name is Jesse Bainbridge. We’re writing a letter to tell you great things about our special friend, Terry Shuck, at Thunder Paws in Poulsbo. I’m writing from Heaven because it was time for me to move here a month ago (it’s WONDERFUL!!) but my Mom still lives there.

So about Terry!  First of all, I was hurting a lot. I’m a senior Golden Retriever and my hind legs and knees were banged up bad and my body was all achy from arthritis and I just didn’t feel good enough to do walks anymore. So my Mom, Jesse, brought me to see Terry for massages and water therapy to make me feel better. What a BRILLIANT idea!!

From the very first time there, Terry was so nice and kind to me and pretty soon, I had a big crush on her (she’s soo beautiful.)   At first I was scared and shivered and acted goofy but then I could tell that she understood dogs from the inside out…and she just rubbed me in all the right spots, and talked sweet to me, and made me feel so special and handsome. Then!! She put me in this big water tank with warm water that made my legs feel so much better. She made sure it wasn’t scary at all and she would give me treats and tell me what a good, brave boy I was! Pretty soon I was so excited to see her each week that I would start barking as soon as we got close to her house. And then my legs and muscles got stronger and I started to feel like a puppy again and I could even run sometimes!

I got sick from something else and needed to go to Heaven, but Terry made my last months with my Mom on Earth so much better. If your doggie needs massage (and who doesn’t?) and some warm, soothing exercise, take your doggie to see Terry. And please tell Terry I said ~~ my Mom and I love her. J

Most sincerely,
Puckett Bainbridge and Jesse ﻿﻿

﻿On October 26, 2011 Skippy had  surgery on the left hind leg with the grade II patellar luxation.  He was  not recuperating as expected.  He would not stand or use the surgery leg  except to help scoot himself around.  He spent most of his time laying down or standing on his two front legs.  He was on daily medication and  was having a very hard time going potty and had a poor appetite. Terry Shuck started give Skippy massage therapy shortly after surgery.  We also put Skippy in swim therapy.

When Terry massaged Skippy he started putting pressure on  the back leg, then started standing on the leg, then he started running using  the leg.  Since he has been receiving weekly massages and swim therapy, he  has become his old self and become a happy dog member of our family again.   He is no longer on pain medication either.   Terry has shown me some  techniques to help Skippy between sessions.

Skippy is in training to become a Delta Pet Partners  Therapy dog.  He has a wonderful temperament and is a very happy dog that  loves interacting with people and all four legged creatures.   We  decided that it was in Skippy’s best interest to leave the right back leg alone  and not try surgery or amputate it.

Because of his body issues we and Skippy’s Doctor feel it  is best for Skippy to continue to receive massage therapy because it helps him  tremendously.   I am very thankful to Terry for helping Skippy regain  his strength and improve his mobility. 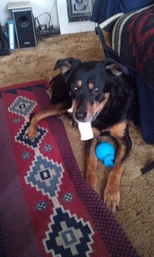 ﻿My  Lido turned 12 years old on June 22,  2012.  Lido had spondylitis in her
neck and back end.  Her spine was fusing together and was putting
pressure on her nerves in her neck which made walking difficult for her.
I happened  to catch an article in a local paper about a new animal massage opening in
Poulsbo.  I had been giving my Lido acupuncture for probably the last three (3) years.  And thought that if I  could make her more comfortable, she might have a chance of extending her  life.  I spoke to my vet, Dr. Bill Larson of Peninsula Mobile Vet., and he
made first contact with Terry Shuck.  He recommended that the massage may  help in releasing some of the tension in Lido's neck.

My first   meeting with Terry Shuck went so well, that I asked Terry to come every  week.  Lido fell immediately in love with  Terry, or maybe it was her stinky treats.  Whatever it was, the two  of them clicked.  After the first week I saw such an improvement in  Lido.  Lido was up and playing with the other two dogs.  As  the weeks went by, Lido relaxed so much with  Terry, that I didn't have to be in the same room with them.  My little  Lido didn't need me.  Which was okay, because I knew she was in good hands.  Get it...good hands.

Unfortunately, my  Lido took a turn for the worse, and couldn't  walk anymore, but she would respond to Terry's gentle touch.  It was  wonderful to see the magic, all because of Terry.  We let Lido  go on July 5th with great sadness.

I would   recommend Terry to everyone who has a pet they love in need of therapy of any  kind.  To include Terry in that therapy treatment gives   your pet an advantage at relaxing and having a chance to live.